Ever wonder what will happen if you strap a jet engine to a go kart! In this video Robert Maddox has done exactly that, but insetead of jet engine he is using a Gluhareff Pressure Jet engine which is a different type of a classic jet engine ,and the results are spectacular. 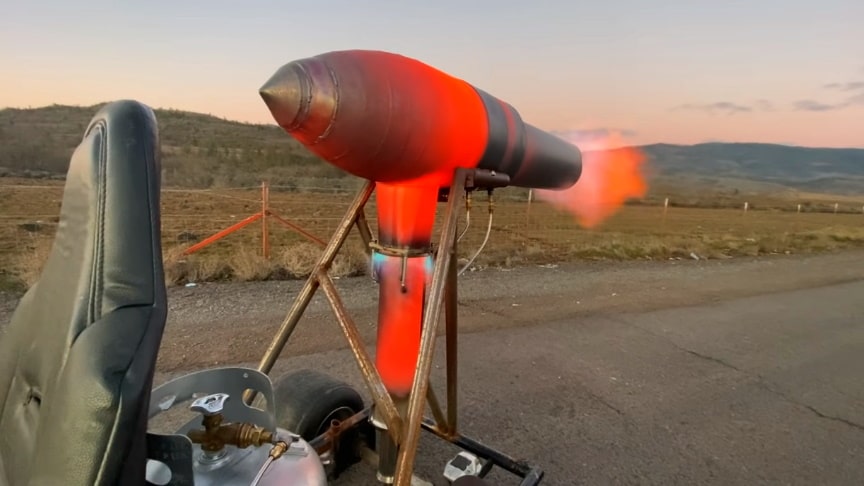 Jet powered go karts do not actually drive the wheels, rather, they provide thrust from an engine mounted to the frame of the kart, while the wheels spin free. there is no connection from the engine to the wheels of the kart.”Here’s my Gluhareff 130 Pressure jet, jet engine go kart running!”

The Gluhareff Pressure Jet is a type of jet engine that, like a valveless pulse jet, has no moving parts. Having no moving parts, the engine works by having a coiled pipe in the combustion chamber that superheats the fuel (propane) before being injected into the air-fuel inlet. In the combustion chamber, the fuel/air mixture ignites and burns, creating thrust as it leaves through the exhaust pipe.

Induction and compression of the fuel/air mixture is done both by the pressure of propane as it’s injected, along with the sound waves created by combustion acting on the intake stacks.The engine has three intake stages, which are sized according to the sound created by the combustion process when running. This has exactly the same effect as the turbine and compressor in a turbojet, creating a vacuum that sucks in air./wikipedia