The HettlageVariator is the core part of a gear drive for tooth belt or chain transmissions providing an outstanding degree of efficiency. The gear can be shifted under full load and is based on a variable sprocket. It was developed in several builds for a variety of applications.Based on this concept the HettlageVariator can replace the gear cassette of a chain drive or the internal planet set of a gear hub. 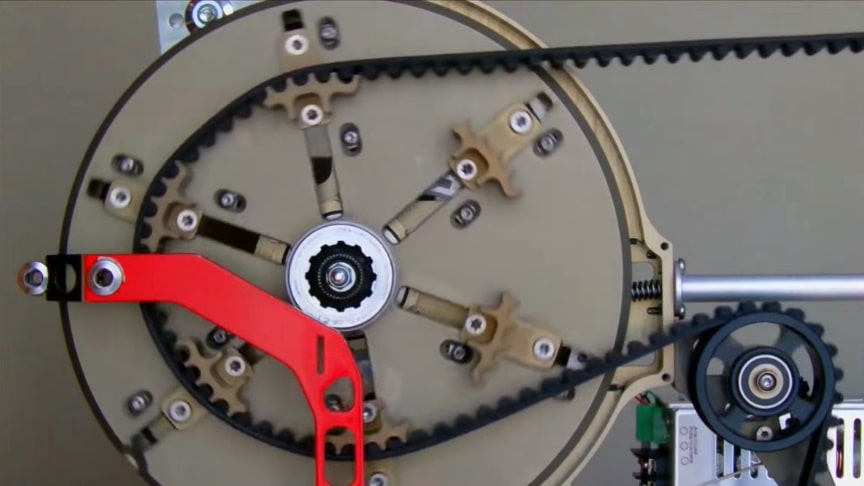 The HettlageVariator is set up on a base disc that is mounted to the propelled axle. The base disc has radial slots, each equipped with a slide. Each of theses slides has a segment of a sprocket at the front of the base disc. The backside of each slide is equipped with a notch mechanism that locks into fixed radial positions.

These positions were defined for the segments to result in a sprocket that matches the tooth belt or chain used for transmission.When shifted, the segments are moved to a different radial position to form a larger or smaller sprocket. This shifting process is done sequentially for each segment when it is not in touch with the chain or tooth belt. After one rotation of the variable sprocket the shifting is complete.

The shifting and notching of the segments is done by a specially engineered shifting unit that is mounted to the axle next to the base disc. Unlike the latter the shifting unit is fixed. It is attached to a frame. The gear shifting is controlled by a shift cable.The shifting process being done in the part of the sprocket that is not looped by the chain or tooth belt allows the HettlageVariator to be shifted when the drive section is under full load. Also the HettlageVariator does not require a freewheel clutch as for instance a gear hub does.via/read more:hettlagedrive