A giant helicopter, with a rotor diameter bigger than the length of a football field. It would be capable not only of transporting a Saturn five S-1C first stage to the launch site – but of actually catching it in midair as it fell on a parachute – ready to be reused. This is one of the biggest mind boggoling space concepts that was never built – developing a reusable rocket technology – but in the 60s. 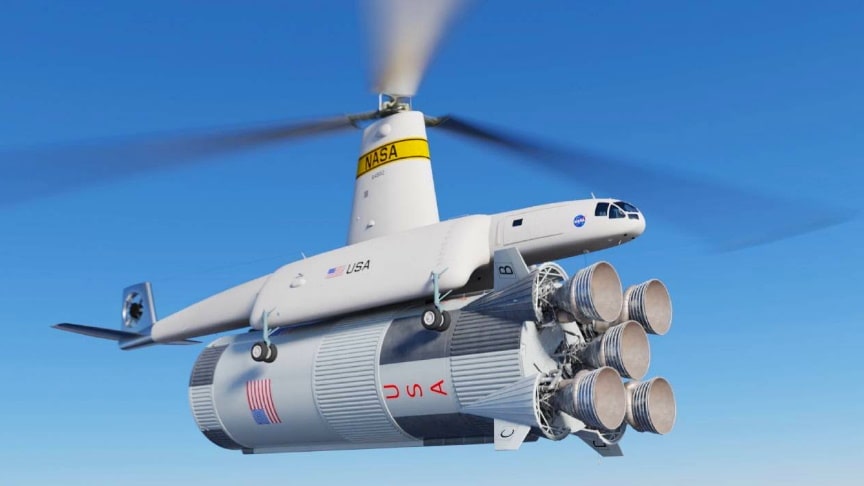 When the rocket was fired, the helicopter would take to the skies from a nearby airbase. It would fly to the zone that the booster, the S-1C, would land, and lotier in the area for up to six hours with its large fuel tanks – hovering at around 15,000 to 20,000 feet (4,500–6,000 meters). Watch the video from Escape Velocity for more info:

When the booster seperated and began its decent,it would deploy a sort of double tandum parachut, the upper section would have a hook. The air tug would approach the decending rocket, and meet it at around 10,000 feet (3,000 meters). At this point the rocket would be descending along a glide path with more forawrd than doward velocity, making it perfect for a intercept by the helicopter.

The Air Tug would fly the same glide path, matching the speed and trejectory, it would dploy a grabbling hook, and with help from a viewing plafrom on the side, it would snag the upper parachut, or pickup chute. Then the helicopter would slowly slow its decent, taking on more and more of the boosters weight, and centering the rocket directly underneath it, assuming the same center of gravity. Once it was sufficently slow enough and the heclipter was carrying the full load, the boosters parachouts would deflate and the fuslage suspended 700 feet below the helicopter. via/read more: Escape Velocity