When Vina Lustado moved into the 140-square-foot home on wheels she and her husband Cliff had built (for $40,000) in 2013, it was a continuation of a lifetime of living minimally: from a modest home in the Philippines as a child to a one-bedroom duplex in LA shared with 9 siblings to an adulthood living in guest houses. 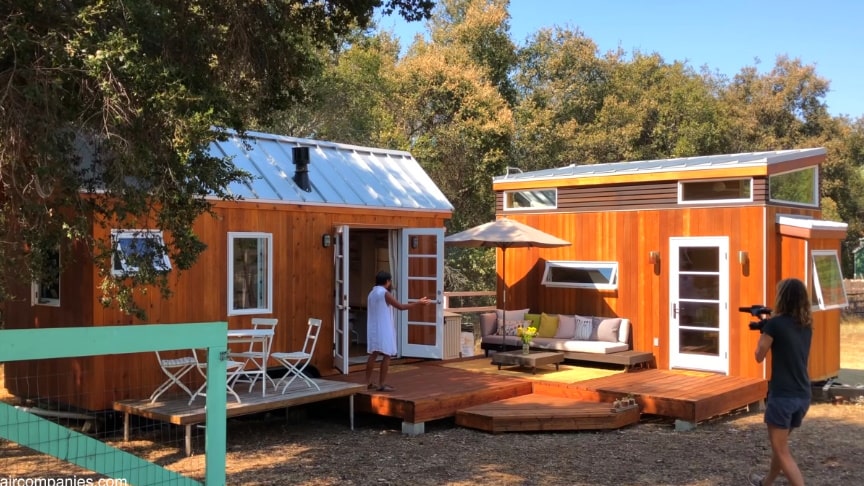 A year later she built a tiny, modern prefab (SIPS panels) office on wheels, and finally, in 2018 she united both her rolling home and office on the same property to create a mobile micro duplex (with shared deck for indoor/outdoor living). Both structures are off-grid, thanks to a 1.5-kilowatt solar setup. Her tiny office is even propane-free (she relies on an induction stove for cooking and a fan plus a tiny heater for temperature control).

She’s hooked up to city water and uses a composting toilet.Lustado has spent years working to gain legal rights for tiny home dwellers. She is currently working with the city of Ojai to zone tiny homes on wheels as ADUs (“accessory dwelling units” AKA granny flats, backyard cottages).

“RVs is what tiny houses on wheels are considered because they’re on wheels. You can not live full-time in an RV,” explains Lustado. “You can not live more than 180 days in an RV because that’s what the term limit is for staying in, recreating in an RV. So tiny housers want to live in it full time, they’re not planning on traveling in it, most people. So that’s what we’re fighting for, to just have legal status.”//Kirsten Dirksen