In race car engines, excess lubricating oil is stored in tanks rather than oil pans. This prevents the oil from sloshing around during the race.Years ago when drag racing oil pan designs were in their infancy, engines would blow-up from damage introduced during the burn-out stage. 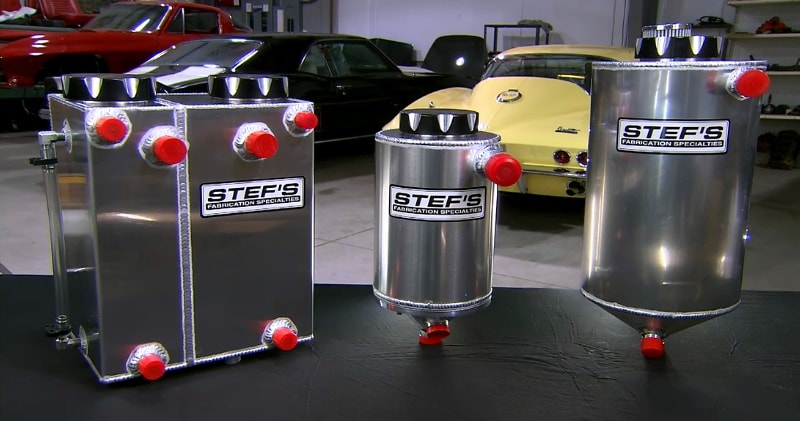 Under full acceleration on the track they operated as intended. But when the high-revving engine moved the race car slowly across the burn-out area and without high G-force sending the oil to the rear of the pan, the engine bearings were often starved of oil. Baffles and other paraphernalia eventually remedied the difficulty.

As the evolution continues we bring you news of the latest developments in competition oil tanks from Stef’s. STEF’S Custom Dry Sump Tank Assemblies are designed to fit in a specific racing applications without sacrificing performance of the tank. Wether its’ offshore racing or dirt racing in the Midwest, STEF’S can fabricate a tank to fit.

STEF’S Custom Tanks are constructed of superior controlled wall thickness metal sheetss then are 100% heli-arc welded. Unlike stamped, spun, or hydro-formed styles of tanks, fabricated tanks are NOT prone to metal fatigue, cracking, and/or application limitations due to inherent design and manufacturing handicaps. All STEF’S Dry Sump Tanks are delivered thoroughly cleaned, leak tested and ready for installation—no assembly required.