A rotary combination lock is a lock commonly used to secure safes and as an unkeyed padlock mechanism. This type of locking mechanism consists of a single dial which must be rotated left and right in a certain combination in order to open the lock. I’ve used a Combination Lock for years but I’ve never really understood how it works until I made this video. 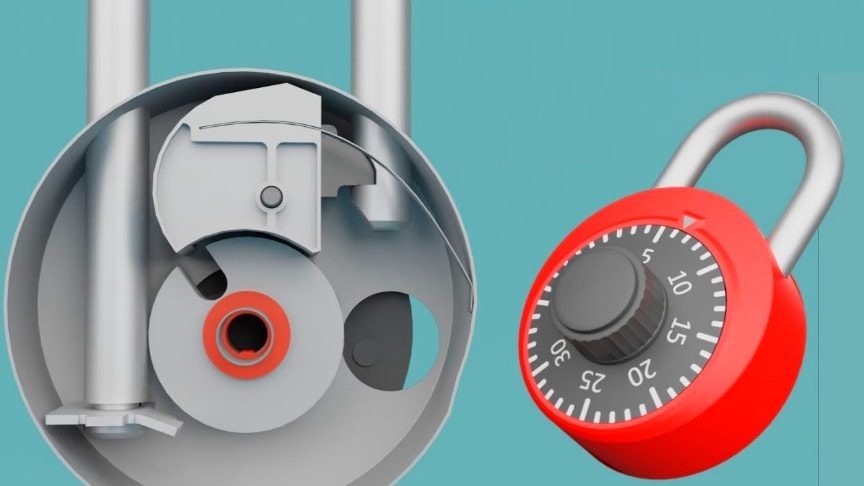 The combination lock that I used in this video was from Master Lock but there are other companies to make them too. Parts of a Combination Lock include: Case, Shackle, Shackle Collar, Lever, Latch, Cams, Washers, Spring, and the Backplate. Watch the 3d Animation.

Contained inside the mechanism are discs, usually three, with notches that must be aligned to allow for a release of the piece holding the lock in place, and the lock to open. The positions of the discs are manipulated by turning the dial left and right; on the dial is a catch—a sort of nub—and on each side of the discs is also a small catch.

As this disc rotates, its catch will in turn begin rotating the next disc in a similar fashion. Once all discs and the dial are rotating together, the dial is rotated until the last disc is in place and the notch is in the proper positioning, then by rotating the dial in the other direction, the catches will all disconnect, starting from the dial to the first disc and so on until they connect from the other side and the discs begin to rotate together by the same method but in the opposite direction. The process is completed back and forth until all discs are in place, and the lock is released./wikipedia