I made a batch of charcoal using the mound method then stored it in baskets for later use. Charcoal is a fuel that burns hotter than the wood it’s made from. To make the charcoal the wood was broken up and stacked in to a mound with the largest pieces in the center and smaller sticks and leaves on the out side. The mound was coated in mud and a hole was left in the top while 8 smaller air holes were made around the base of the mound. 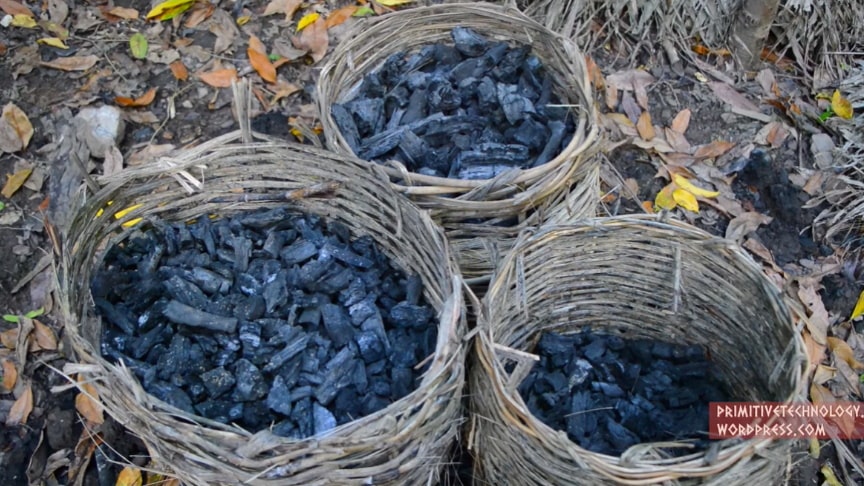 A fire was kindled in the top of the mound using hot coals from the fire and the burning process.The fire burned down the inside of the mound against the updraft. I reason that this is a better way to make charcoal as the rising flames have used up the oxygen and prevent the charcoal already made above them from burning while driving out even more volatiles.

The next day when the mound was cool to the touch (this can take about 2 days sometimes) I opened the mound. The resulting charcoal was good quality. Some wood near the air entries had burned to ash though these were only small twigs and leaves. This is the reason small brush is put on the out side of the mound, to be burned preferentially to the larger wood on the inside thus protecting the large pieces of charcoal.

The charcoal that was made was hard and shiny. When broken open it had the ray structure of the wood preserved. When moving the hand through it the charcoal sounded tinny, like coral on a beach being moved by waves. These are signs of good quality. Bad charcoal is soft, breaks easily and has a muffled sound.//Primitive Technology