The USSR had a big problem in the 1960s, and when I say big, I mean bigger than any other country in the world. Because the terrortiy was so vast, they required a way to keep their borders secure – and considering that during that time the US was infiltrating their airspace consistently with u-2 spy planes, the soviets needed to stop stickybeaks. 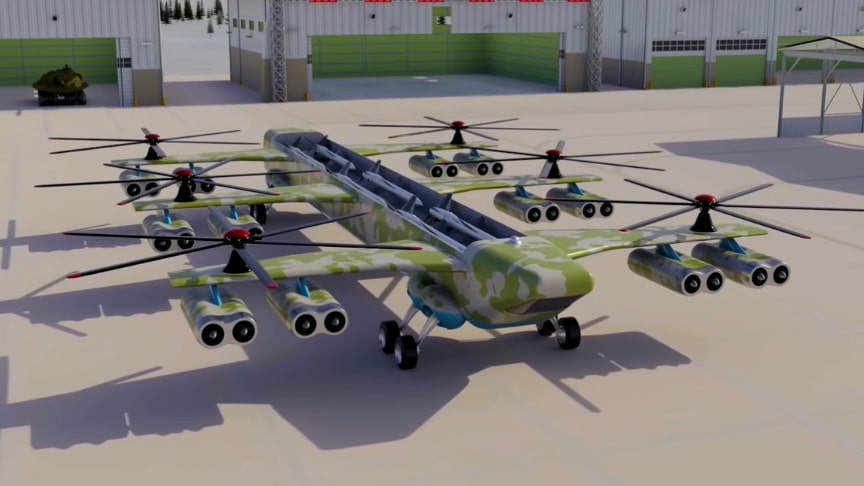 Started by the Yakovlev bureau, Project GDP-6 proposed the construction of a heavy multi-rotor helicopter designed to carry special payloads. Its official name, like all things USSR, was simply called the VVP-6, and would have a very basic elongated shape 49 meters long, and 6 meters wide./Found And Explained

In the nose was a cockpit, either piloted by two crew members, or computerised depending on the role of the aircraft – such as missile launching. It would have a square fuslage throughout, and allow it flexibility in cargo carrying capacity. This wasn’t airdynamic, and would fly like a brick, but you bet with six rotors, fuel consumption was the least concern on their minds.

While we don’t know for sure, we can estimate that its carrying capacity was in the region of 45-50 tonnes – based on the prospective cargo it was pitched with.To do this it would be powered by 24 tubrofan engines, with 12 on each side and four motors each, that would in turn active six contra-rotors. In simple terms, they would rotate in different directions to prevent the aircraft being pushed in the wrong direction and fly staight.via/read more: Found And Explained