Dash designed and built this incredible 3-story container home over the course of 4 years. He has since started a social purpose co where he donates one container home (to homeless or disaster relief) for every four container homes he sells. 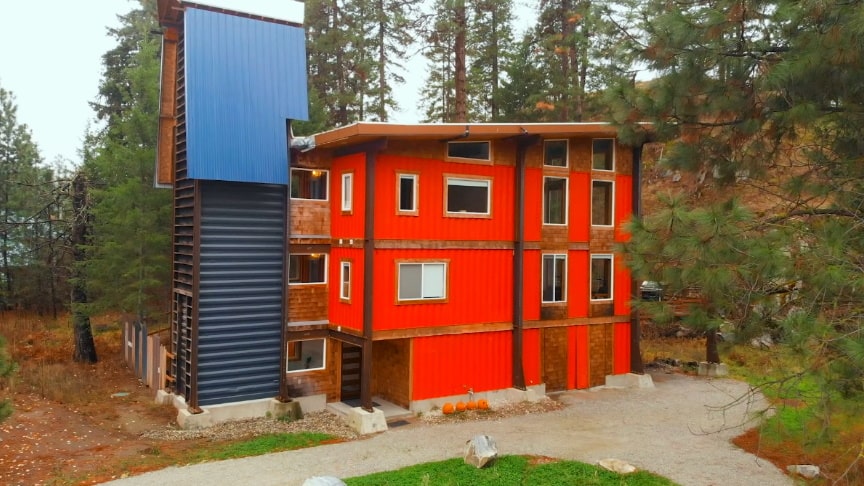 Four 40ft containers were loaded into the exoskeleton or erector set, and the fifth was fabricated horizontally, and then erected vertically to create the stairwell. Once the containers were in place and secured to the super structure, it was time to frame and sheet the shed roof.Once the interior walls and ceilings were removed, we began to install the steel studs. Video by Tiny House Giant Journey:

(Steel studs are used in industrial construction. Once the windows were framed, (internally), the windows were cut from the exterior of the container, using the window frame as a guide for straightness.Plumbing was subcontracted out as well as the HVAC system, (mini-split). There were some valuable lessons learned in working with subs, although few, on this project.

The rest was very much like finishing out a standard wood home with a few exceptions…The original container floor was refinished, and is a nice hardwood teak laminate, that can handle small forklifts loading and unloading them. The container doors were gutted to leave the usable/moveable steel frame and glass was installed. The finish wood and trim is from the 2015 OK Carlton Complex fire.via read more: dvcodesigns