The wooden houses are prefabricated, loaded onto trucks for transport, and unfolded on-site in hours adding the windows, drywall, and interior finishings takes about two weeks.After the 2009 earthquake in Central Italy left 40,000 people homeless, Nico D’Incecco and the team at A-Fold began thinking of how they could help provide quickly deployable shelters. In 2019, they released a house that unfolds in hours and provides anti-seismic security. 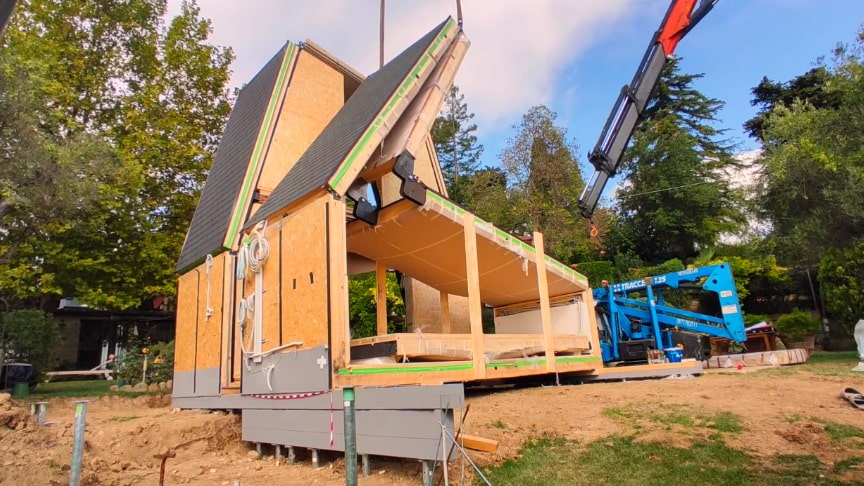 The first design was the Model A (an A-frame), but the company soon released the Model-T (for “trapezoid”) to gain more space on the second floor. There is no need for a concrete foundation since the homes can be placed on screw piles.

The homes begin around 51 (550 square feet) and can grow depending on how many modules one purchases. The only limitation is the modules need to be placed inline, so the company suggests stopping at the “villa” size of 127 square meters (1367 square feet). The units are prefabbed with a selection of cladding, roofing, and flooring.

The homes can also be folded back up and moved, as easily as they unfold, making it possible to reuse them at a new location. The hinge system construction also provides flexibility in the home during an earthquake, allowing it to “disperse the energy of earth tremors” and weather seismic phenomena.From these early stages of Model T installation we can see that the construction times are really quite fast compared to traditional constructions, which considerably reduces the environmental impact./Kirsten Dirksen