The SQUID (Streamlined Quick Unfolding Investigation Drone) was recently unveiled by researchers from Caltech. This prototype for a ballistically launched drone — a football-shaped, foldable quad-rotor — unfolds after launch and begins to fly even when launched from a moving vehicle.The operation of multirotors in crowded environments requires a highly reliable takeoff method, as failures during takeoff can damage more valuable assets nearby. 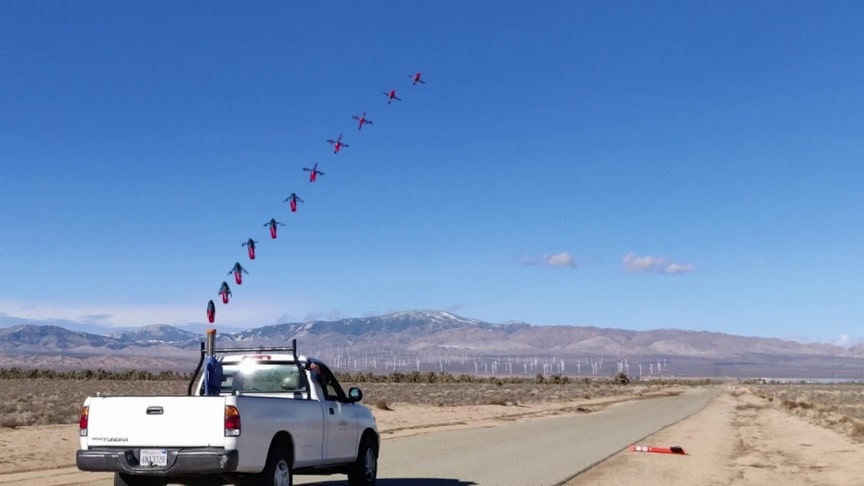 The addition of a ballistic launch system imposes a deterministic path for the multirotor to prevent collisions with its environment, as well as increases the multirotor’s range of operation and allows deployment from an unsteady platform. In addition, outfitting planetary rovers or entry vehicles with such deployable multirotors has the potential to greatly extend the data collection capabilities of a mission. Video by Daniel Pastor Moreno, Aerospace Graduate Student / Caltech.

A proof-of-concept multirotor aircraft has been developed, capable of transitioning from a ballistic launch configuration to a fully controllable flight configuration in midair after launch. The transition is accomplished via passive unfolding of the multirotor arms, triggered by a nichrome burn wire release mechanism.

The design is 3D printable, launches from a three-inch diameter barrel, and has sufficient thrust to carry a significant payload. The system has been fabricated and field tested from a moving vehicle up to 50mph to successfully demonstrate the feasibility of the concept and experimentally validate the design’s aerodynamic stability and deployment reliability.