The Hindenburg is a largest airship ever built. Unfortunately it caught fire and was completely destroyed. There is still debate over what caused the accident. This video shows the inside of the Hindenburg: the A Deck and B Deck, the crew areas, control car, cargo areas, and engine cars alongside of the ship. 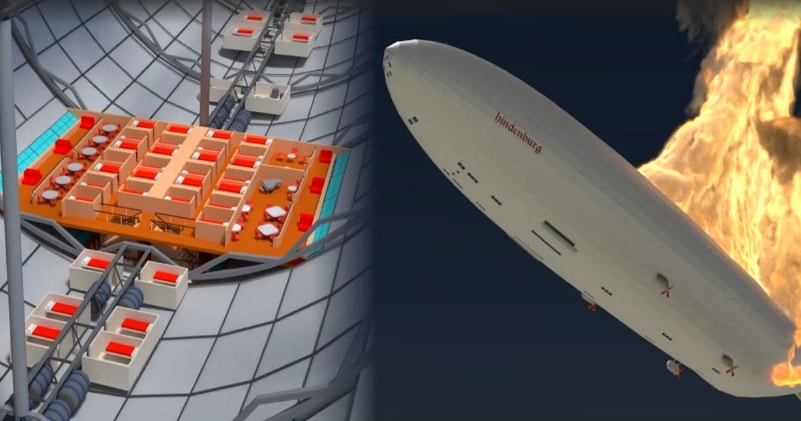 The 16 gas cells held the ship up but were filled with hydrogen which is extremely flammable.Almost 80 years of research and scientific tests support the same conclusion reached by the original German and American accident investigations in 1937: It seems clear that the Hindenburg disaster was caused by an electrostatic discharge (i.e., a spark) that ignited leaking hydrogen.

The spark was most likely caused by a difference in electric potential between the airship and the surrounding air: The airship was approximately 60 meters above the airfield in an electrically charged atmosphere, but the ship’s metal framework was grounded by its landing line.

The difference in electric potential likely caused a spark to jump from the ship’s fabric covering (which had the ability to hold a charge) to the ship’s framework (which was grounded through the landing line). Investigations in the aftermath of the disaster, as well as later reconstructions, confirmed it was the hydrogen combined with inclement weather at Lakehurst that took the airship down.