The EPIC OF GILGAMESH is the earliest great work of literature that we know of, and was first written down by the Sumerians around 2100 B.C. Ancient Sumer was the land that lay between the two rivers, the Tigris and Euphrates, in Mesopotamia./ Peter Pringle 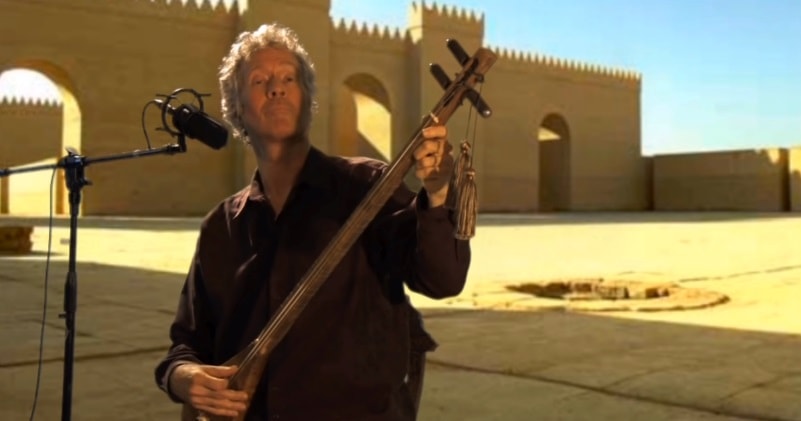 The language that the Sumerians spoke was unrelated to the Semitic languages of their neighbors the Akkadians and Babylonians, and it was written in a syllabary (a kind of alphabet) called “cuneiform”. By 2000 B.C., the language of Sumer had almost completely died out and was used only by scholars (like Latin is today).video/text:  Peter Pringle

No one knows how it was pronounced because it has not been heard in 4000 years.What you hear in this video are a few of the opening lines of part of the epic poem, accompanied only by a long-neck, three-string, Sumerian lute known as a “gish-gu-di”. The instrument is tuned to G – G – D, and although it is similar to other long neck lutes still in use today (the tar, the setar, the saz, etc.) the modern instruments are low tension and strung with fine steel wire.

The ancient long neck lutes (such as the Egyptian “nefer”) were strung with gut and behaved slightly differently. The short-neck lute known as the “oud” is strung with gut/nylon, and its sound has much in common with the ancient long-neck lute although the oud is not a fretted instrument and its strings are much shorter (about 25 inches or 63 cm) as compared to 32 inches (82 cm) on a long-neck instrument./ Peter Pringle