In the wild, the relationship between predators and herbivores has been following a simple hunter-prey pattern for millions of years. Some animals run away, trying to survive, while others chase after them, trying to kill. However, the story that happened in Pakistan once again proves that there are exceptions to every rule. 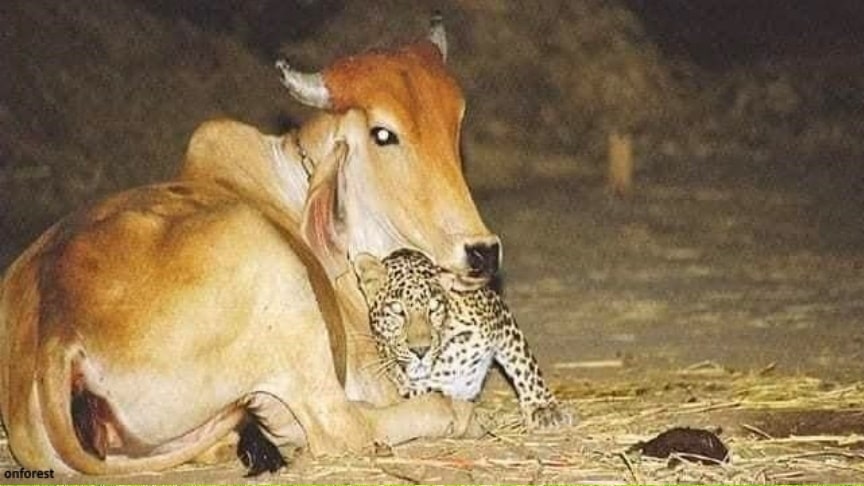 It all started when a family often heard their pet dog barking in the middle of the night. So they decided to put in closed-circuit television (CCTV) cameras to see what caused the commotion in the vicinity.Apparently, there is a leopard that often comes to ‘visit’ their pet cow in Antoli Village, Gujarat, India. What is surprising is that the leopard was not there to kill the cow. In fact, they seemed to know each other and are good friends. Watch the video from Incredible Stories for the full story:

The leopard is said to have visited the motherly cow continuously from 8 to 22 October 2002, every night, usually between 9:30 pm. and 11:00 pm.The animal then reappeared from 4 to 29 November of the same year.Not only that, the leopard kept coming to see his ‘friend’ until the first week of March, and then never came back again.

Among the most famous stories that circulated among the public is that the cow and the leopard are good friends because the cow used to help it when it was still a cub.The mother of the leopard is said to have died and at that time her baby was only 22 days old. So, it was the cow that fed the little cub. Since then, the leopard has considered the cow to be his mother./Incredible Stories