I built a water powered hammer called a “Monjolo”. I started by making a water spout from half a hollow log to direct water from the creek. This was set up in the creek and water flowed through it. The hammer was made from a fallen tree. I cut it to size by burning it at the points I wanted it cut (to save effort chopping). 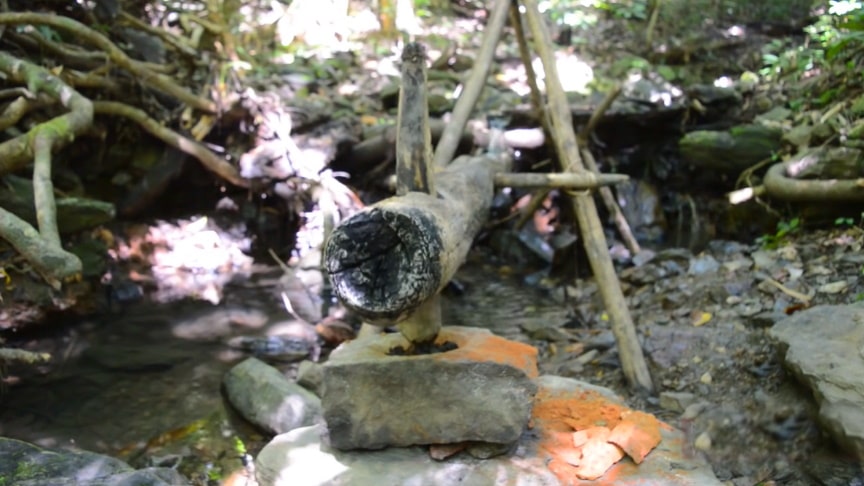 Next I carved a trough in one end to catch falling water. This was done first with a stone chisel that was then hafted to an L–shaped handle and used as an adze. This adze only took about an hour to make as I already had the chisel head and cordage made of bark fibre to bind it with./ Primitive Technology

The water then emptied out of the trough (now slanting downwards) and the hammer then slammed down onto an anvil stone returning to its original position. The cycle then repeated at the approximate rate of one strike every 10 seconds. The hammer crushes small soft types of stone like sandstone or ochre. I carved a bowl into the anvil stone so that it would collect the powder. I then crushed old pottery (useful as grog for new pots) and charcoal.

Practically speaking, this hammer worked ok as a proof of concept but I might adjust it or make a new one with a larger trough and bigger hammer for heavy duty work.This is the first machine I’ve built using primitive technology that produces work without human effort. Falling water replaces human calories to perform a repetitive task.via/read more: Primitive Technology