Launched in 1923 at the Paris Show, the first motorcycle to be marketed as a BMW featured a 493cc, twin-cylinder, sidevalve engine having horizontally opposed cylinders, and this ‘flat twin’ layout would forever be associated with the marque. The R32’s advanced specification included shaft drive, comfortable suspension and exemplary finish, characteristics that would remain BMW hallmarks and ensure the marque a loyal following for decades to come. 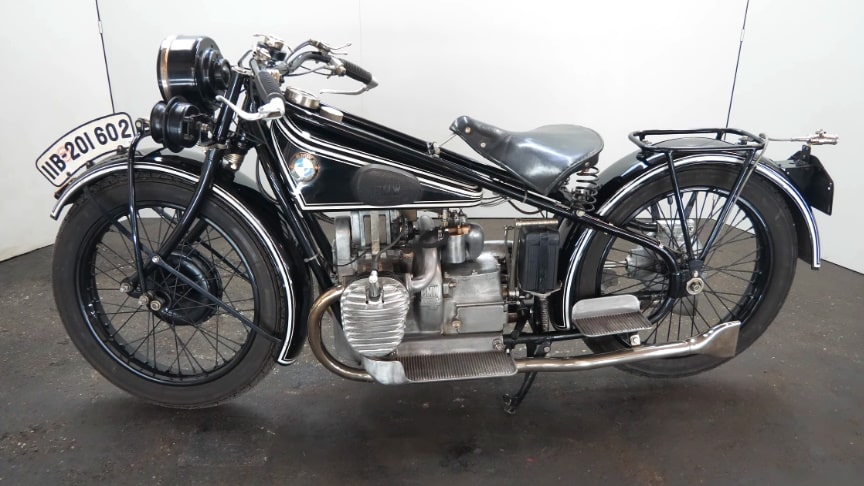 Development of the BMW engine proceeded rapidly throughout the 1920s, with barely a year passing without some major technical advance. The first 750cc models, the R62 and R63, arrived in 1928. A sidevalve tourer, the former employed the same long-stroke (78mm) built-up crankshaft as the new 500cc R52, while the sporting overhead-valve R63 featured a short-stroke (68mm) crank coupled with a 83mm bore.

These new engines incorporated a strengthened gearbox featuring a ‘side-throw’ kickstart, while the cycle parts were upgraded with a larger front brake. Electric lighting was now standard on all BMW models.

The arrival of the fashionable ‘saddle’ fuel tank at the end of the 1920s meant that BMW’s distinctive wedge-shaped tank had to go, and the resulting wholesale revision of the design undertaken for 1929 would later confer iconic status on these early BMWs.This machine combines design and large displacement on two cylinders. She runs very well.via: classic-motorcycle.com